I have always had a turbulent relationship with the rat ogre, so for the NAF Championship I thought I would take a star player instead.  My kit bash star play is made up of a skaven blitzer, black orc feet and weapon blades for claws.


I created a stat card too from a Photoshop template from thedeathjungle.blogspot.co.uk I don't have Photoshop so I used a free tool called gimp and added the Photoshop file plugin. 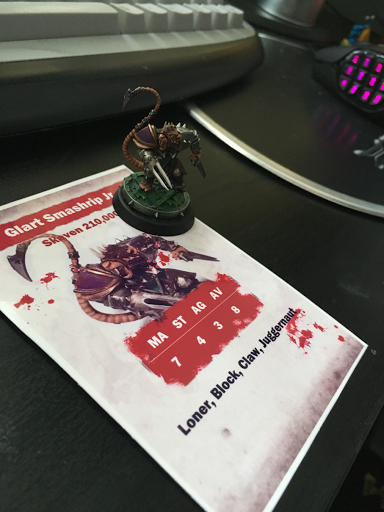 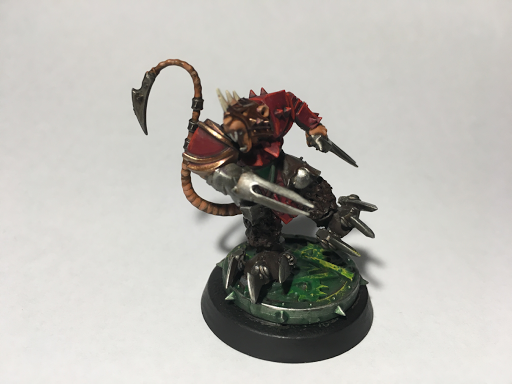 This team is made up of the new 2016 blood bowl skaven team. To get the 4 gutter runners I needed to buy a second box. But I managed to recover a lot of the cost by selling the remaining models on eBay. 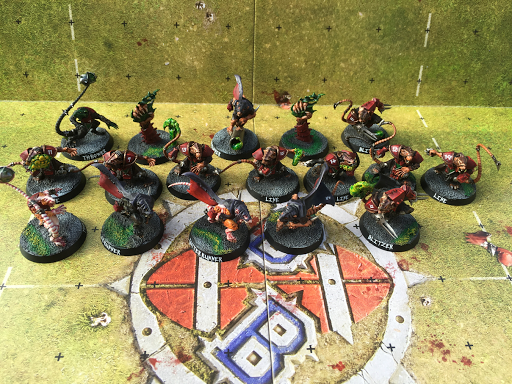 To get variety in models I have done some minor modding with felt tip pens for pipes, and added slime with clear adhesive UHU. I cut out clear plastic to a small point then used the adhesive to dribble/cover it. 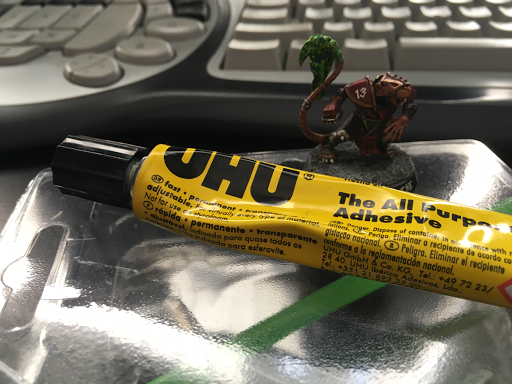 The Skaven are spit into a few skin colours to further separate the models. 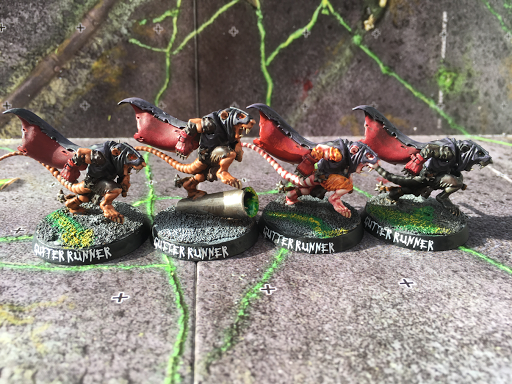 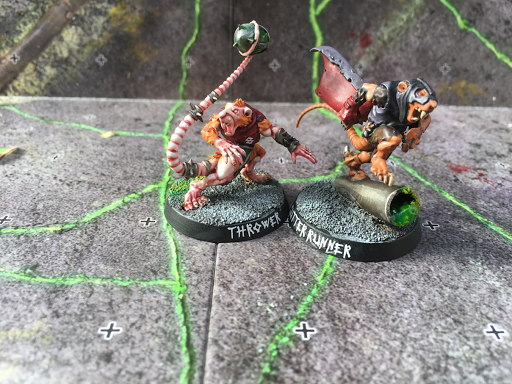 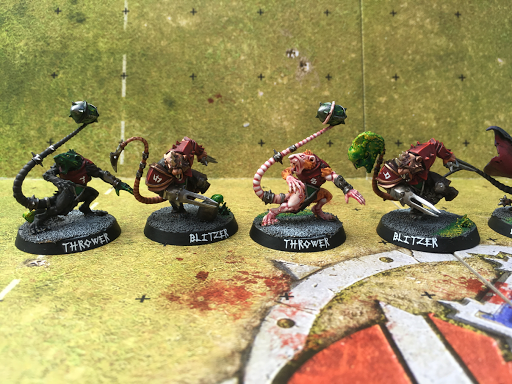 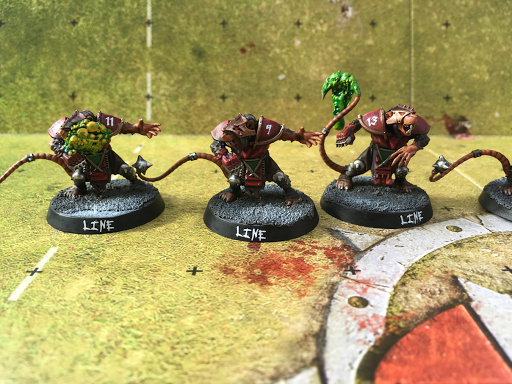 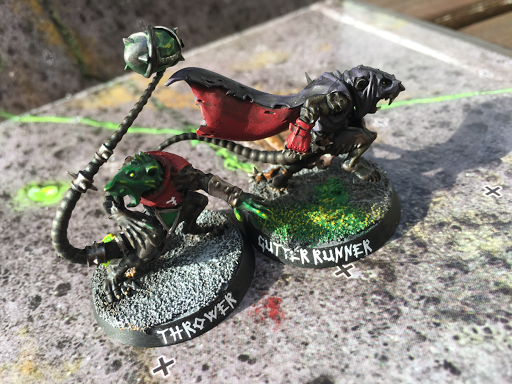 Posted by Triple Skull at 09:11 No comments:

The newest team is a joint one with my daughter who loves doing crafts of all types so we are doing this project together. Well she is doing most of it, I am just helping with tips and the odd idea.

We are both relative beginners at green stuff so we are using a combination of card board with PVC and simple green stuff shapes.

To keep costs down the team is built from Mirkwood Rangers as they have a range of dynamic poses.

The weapons are clipped off and quivers removed. The simple green stuff tails are used to cover up marks. 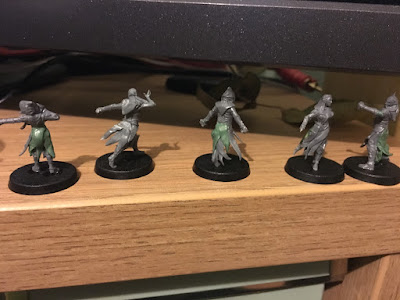 The box comes with 10 elves, so we have bought a single tree man from old sprues of Sylvaneth Dryads from ebay. You can often get them from places like www.letthedicedecide.co.uk.

Here is the full team of 11 for around £30, depending on how the painting goes we may fill out the ranks with custom war dancers. We have added the odd shoulder pad with card board and sculpted a ball for a thrower and added a severed orcs head to scare the opposition. 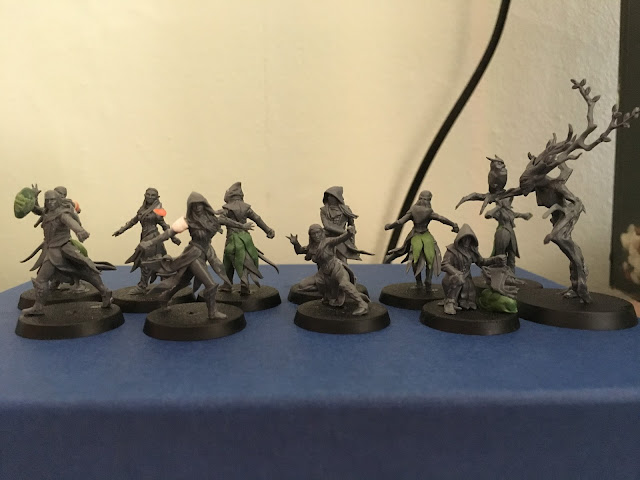 Posted by Triple Skull at 07:39 No comments:

Thought I would post some pictures of my next project. A dwarf team built from the Avatars of War, Dwarf Berserkers set. This is a first for me as I am trying to create helmets and shoulder pads to make them look more Blood Bowl like.

I don't have very much experience with green stuff so I have bought head bits from letthedicedecide to make helmet moulds, chopped up parts of the dwarf horn from the Avatar of War set. Also chopped up a Black Orc's head and knee plates to make shoulder pads. I then created some casts using Instant Mold so I can create multiple copies. The Blitzer below had parts of the horn for shoulder pads, and initial a cast of a dragon for wings on the helmet which I replaced with home made fans. The Runner below has parts of a Black Orc's head for shoulder pads. Another thing I am going to try with the this team is zenithal highlighting. Below is a picture of a long beard, with a sculpted helmet and black orc helmet for shoulder pads. If Blood Bowl was mine.

There has been the usual rumours about the release of a new Blood Bowl box this year with a few minor differences. The removal of specialist games support and the discontinuation of block dice with the NAF. To an optimist (which I am) this could be markers for them to relaunch the site and taking their IP back to make their own block dice.

If Blood Bowl was mine, but I still had the constraints of GW vision of focusing on the core games and producing miniatures for large armies I would do the following...

Release a core game of orcs versus humans and if it sold well produce a second themed set. Maybe a nature theme with wood elves versus amazon's or lizards or a chaos or undead themed game. Within this core box set, I would include two versions of the game. The current competition rules and Blood Bowl 7's with a card overlay to cover each side of the pitch to make the smaller pitch. Each side overlay would be team themed.

The next tactic would be to change the game to operate as a support role for sales to their core games. I'd Look at current lines of the core armies and synchronise the 24 Blood Bowl teams to them. Producing articles on how to convert core lines to Blood Bowl teams. There are already examples of the standard armies successfully converted. Check out bensworkbench.blogspot.co.uk for the following skaven conversion or my own dark elf and orc conversions. For future releases of core units for 40k and fantasy I would keep this in mind and design core units with more options to be weapon-less or assembled in different dynamic poses to meet the needs of multiple hobbies. 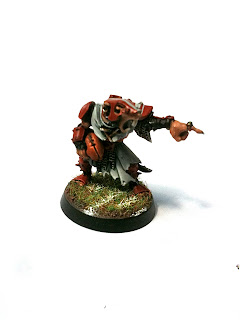 Another possibility to modify teams could be to produce small plastic expansion packs of shoulder pads heads with helmets and hands. This could be taken a step further to have rookie, veteran and star expansion packs. The rookie teams could be simple pads and helmets with the vet and star packs becoming my more elaborate. Maybe even packs for player progression to make models to look like they have a specific skill. All the above still encourages purchases of their core models.

To further make the game more collectable, I would follow the path of the electronic codex's, producing them over time for each team.

Team themed codecs would include:

Primarily distribution would be electronic to cut down on costs, but also have a premium print on demand service to get gloss versions with card dugout and markers.

Lastly I would let their customers play Blood Bowl in the GW stores.
Posted by Triple Skull at 09:38 1 comment:

Email ThisBlogThis!Share to TwitterShare to FacebookShare to Pinterest
Labels: GW

The Necromantic Racketeers are finished and are now my league team for the Victory Doughnut Cup 2013. I also took them to the NAF Championship 2013 in Nottingham, I had a great time but did awful.

Most of the miniatures from this team are from Willy Miniatures. The werewolves and golems painted themselves but the wights and zombie were difficult to get right.

On another note does anyone have any strategy tips for facing Norse when using bash light teams like Necromantic and Dark Elves especially in tournaments. Both teams do something similar with regards to frenzy and using the side lines to surf the opposing team. But the Norse come with a lot of extra block and frenzy with a sprinkling of might blow. The best I can seem to muster is a sprinkling of wrestle to try and negate the block.

I finally got round to finishing my dark elf team the Naggaroth Side Skates. I am quite please with how they turned out and took them to the Waterbowl 2013 tournament in February.

The running game coupled with screening fitted my play style and I did quite well.

The challenge is to see if we I can put together all you need to play Blood Bowl for £30 ($48, 35 Euro). This includes two painted, teams, dice and pitch. Teams have to be new and not bought from ebay, so other people can do the same.